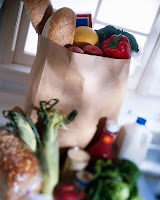 After the shoe fitting, we headed 15 miles down the road to my favorite Weeble destination, Market Basket. I was looking forward to some profitable time while the Weebles shopped. I've been able to finish whole volumes of books or write complete Heath sagas. Himself had the laptop and the gizmo to run the computer off the car battery.

No surprise there were no handicap spots so Himself pulled alongside the curb, and I got out to offload the Weebles. Ma clasped my arm with an iron grip and said, "You come with me. I need your help." My heart sank. No reading time. No finding out what would happen next to Jamie and Claire in Dragonfly in Amber. No time to start a new Heath story. I hoped my grimace looked like a good natured smile as I helped Ma to the store entrance. Dad had gone ahead to get Ma a shopping scooter. I turned to watch Himself troll the parking lot and find a space away from cars, distractions and shopping.

Ma boarded the scooter and headed to produce. Dad took a carriage and coasted to dairy at the opposite side of the store. I sighed and trailed along in Ma's wake. I hate grocery shopping. I don't do my own and here I was helping Ma with hers. Ah well, the good deed will certainly shorten my stay in Purgatory or at least boost me to a higher level of hell.

We wove our way through the produce cases. Ma pointed at the items. I pawed, selected, and thumped and handed over the item for final inspection. I went on search missions for a five pound bag of carrots which we had walked past and MacIntosh apples. Her cart was laden with fresh produce of all shapes, sizes, and colors, and then we rolled into the Meat Department.

Dad had told me shopping took so long because Ma had to look at all the meat in the cases. She doesn't just look at the meat, she blesses every single package. I stood at her side like an acolyte and handed up the neat shrink-wrapped packages. In the nomine pork chops, et filet de mignon, et spirited sirloin. She stared, debated, and decided down the entire 80 feet of refrigerated cases.

Three quarters of the way through the department, she said "I want a ham slice." I look back the way we came, but don't see pork or pork by products. The meat manager suddenly appeared and I asked him for directions. I find the ham slices. Large, single slabs of ham that would grace Heath's breakfast plate with a side of scrambled eggs and hash browns. I don't think is what she has in mind, but I present it to her. "No, ham sliced."

I cock my head to the side like a puppy learning a new trick. I do not understand grocery lingo. "You mean sliced for sandwiches?"

I went in search of the meat manager. "I'm looking for ham slices, like you would have for sandwiches, but not from the deli." He cocks his head like a puppy too. I tried to translate. "You know how Oscar Mayer has bologna in packages? My mother wants ham like that." He led me to the packaged meat. There's eighty feet of gleaming white refrigerated cases each laden with cryovacced packages of nitrates. Oscar Mayer, Hormel, Plumrose. I found a package of store brand, sliced ham. I brought it back to Ma and handed it to her as if I'm holding the Holy Grail.

"No, I want the sliced ham like you have for New Year's dinner." She is sitting next to a case of spiral sliced hams. "Like these!" She grabbed a small ham. I returned the package ham to its correct place.

We entered the deli department on the opposite side of the store where we started. Dad caught up to us. The deli is perpendicular to the dairy department where Dad started. His cart has a dozen eggs, a gallon of milk and a gallon of orange juice. I'm puzzled and am about to ask him how it could possibly take an hour adn a quarter to gather these items. Then I remember I don't grocery shop so I kept my mouth shut. He took a deli ticket and leaned over to get instructions from Ma.

"Oooo!" Ma tugged my sleeve. My Uncle Bob, God rest his soul, had once told me he did the shopping for his wife. He'd get home with the bags and she'd say "Oooo, I forgot...." He said he spent $80 on groceries and another $40 on "ooooo". Ma needed denture cleanser so we headed back towards produce to the health and beauty aisle.

There was no one in the aisle except a girl stocking shelves. Ma hit the throttle and tore up the aisle. Thankfully, the girl was able to leap onto a shelf as Ma rocketed by.

Ma maneuvered the cart up and down the aisles but misjudged a turn and a four foot stack of Little Debbie snack cakes came down in a clatter. People all over the store came to a standstill. I dove for the boxes as Ma tried to back up the cart to make the turn, and grabbed them before she crushed boxes of Zebras, Brownies, and Christmas Cakes. With a red face I quickly stacked boxes before a disembodied voice could announce "Clean up on aisle 6"

"She usually worse than that," said Dad shaking his head. I raced after Ma as she turned down the pickle aisle. Ma and Dad spent 10 minutes debating the merits of pickle cuts and whether kosher dills were better than polish spears.

I danced from foot to foot partly from impatience but more from a full bladder. I have problems using public toilets and no way in hell would I use the grocery store rest room which I was sure was filthy. I hoped they would choose a jar of pickles before my bladder burst.

A choice was made, and she sent Dad in search of an item while we went back to the pasta aisle. "Get the gemelli they're on sale five for a dollar." Dad came up behind me as I reached for the elbows.

"What are you doing?" he snapped.

"She told me to get the elbows."

"They're on sale?" I offered feebly.

"But she doesn't like them, and I'll get yelled at for cooking them."

I shrugged and tossed them into the cart. Thou shalt honor thy father and mother which means obey. Ma has more power.

After crisscrossing the store in several more search grids for forgotten items, shopping was finished. I made my escape as they entered the check out line. I found Himself happily tapping away at the laptop, warned him they were in the checkout line, and he needed to bring the car around so we could load Weebles and groceries.

As I helped Ma into the car, I noticed her pocketbook was very light. I looked in it and it was empty. "Ma, where's your wallet?" Dad accompanied me into the store to look for the missing wallet.

"This happens every %^$%^$ time!" he yelled adding other phrases in a variety of tongues. A check out girl sipping a soda on her break burst out laughing as we walked by. Without the wallet we go back to the car.

"Where were you? I didn't bring my wallet!"

I heard combinations of phrases I have never heard put together before. I get in the car. Chug, chug, toot, toot. Off we go. Not too bad, we completed the shopping expedition in two hours. As we pull into the driveway, Ma informs me she didn't finish all the shopping and will need me the week after the holiday week. Deep sigh.

LOLOLOL Too hilarious! Himself is lucky to have been able to secret away in the car!

Yep, a cooler spot in the everlasting bon fire for you! What a hoot! Happy New Year my Friend!

Okay, I really needed a good laugh this morning--stuck as I am with two clogged up kitchen sinks!
Loved the knocked over Little Debbie's with the scooter and the great pickle debate. Been there, done that!
If I were in charge, you'd certainly get a few years slashed off the hot time. But, who knows, I'm sure God likes a good laugh now and then too!

Salut! Excellent whine, CJ. I like the way you say Mahket Basket

CJ Kennedy
Left-handed calligrapher and lettering artist. Favorite color is not pink. When she grows up, she wants to be a cowboy.

Popular Posts of All Time 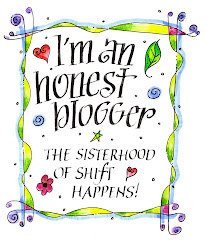